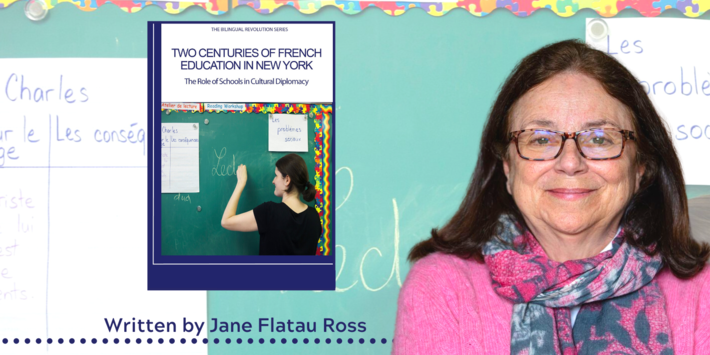 In the 20th and 21st centuries, it is often the United States that is cited as the country most effective at engaging in cultural diplomacy. Or, the U.S. is touted as a major exporter of "soft power" to the rest of the world. But, in Jane Flatau Ross' Two Centuries of French Education in New York, it is France's efforts to spread influence abroad with culture—in this case education—that is given the spotlight. Dr. Ross, through a look at her own internationally flavored life and long career at the Lycée Français in New York, examines the global network of French schools abroad. She focuses on the subject through the lens of K-12 schools in New York from the early 18th century on, particularly focusing on the 20th-century Lycée Français and an earlier precursor.

Professor of History at Ohio State University, Alice L. Conklin offered the following in praise of Dr. Ross: “In this wonderfully engaging book Jane Ross restores to view a little-known dimension of French educational rayonnement in the US.  A must read for anyone seeking to understand the cultural ambitions of global France today.”

It is true that this work of combined history and memoir is unique, in that few scholars have looked at specific “global school” models. The author’s case study of the Lycée Français de New York (1935-present) and other French schools in New York explores how the French national education systems functions not only beyond the hexagon of France itself, but also beyond the strictly colonial “civilizing mission” that was advanced by French schools in both French colonies and former colonies.

The recently published Two Centuries of French Education in New York was born out of Dr. Ross' work in the International Education doctoral program at NYU’s Steinhardt School. While engaged in her studies there, she initially thought her dissertation thesis would revolve around heritage language learning. She had founded the French Heritage Language Program, an educational resource for Francophone immigrants to the U.S. shortly after her retirement from a career of 30 years at the Lycée.

It was only when the teacher and scholar began to pull material together for her doctoral thesis that she realized that the story of French schools and the history of the Lycée in New York would be fertile ground for research and eventually for publication. That suited Dr. Ross well, as she was "more comfortable with an historical perspective as opposed to an anthropological and statistics-based approach." She was, in fact, educated as an historian, holding undergraduate degrees in History and French from Swarthmore College.

Upon completion of her thesis, one of her committee members suggested she add some personal elements to the writing. This advice was based on that professor's own scholarly work on peace and conflict studies in Afghanistan, in which she interspersed theory with anecdotes from her time on the ground in Kabul.

It took some adjustment of tack, but Dr. Ross states, "I think the most enjoyable parts [of writing the book] were the snippets of personal family history that I added after the thesis was completed. I felt I had more freedom to make the book more personal and hopefully more interesting for readers who might find the more technical or academic aspects less vibrant."

On the contrary, the distilling of French educational history in New York is compelling, particularly including the profile of the 19th-century Economical School that gives insight into the operation of an international, bilingual school in the early days of the American Republic. In fact, Dr. Ross "greatly enjoyed the research into [this] school."

One of the first sections of the book lays out the origins of a global French education system and, to be sure, French education itself. This posed the most challenging research for the author and educator: "The most difficult parts were those concerning the technicalities of the French government's relationship to the schools abroad. While the schools themselves," she adds, "and specifically the Lycée Français de New York, each have a history of their own, they fit into an administrative structure that almost seemed to exist in a parallel universe."

While at the Lycée, the writer of Two Centuries of French Education New York reflected that she "never thought [she] was a part of this "cultural machine", a machine of cultural diplomacy to be exact, which was a true global phenomenon."

"But, I was," she observes. "That was why the Cambodians were there; why the Iranians came after the Shah fell; why Africans were there and why they were sometimes not there."

“The Lycée creates a cultural outpost with people singing La Marseillaise. It is important to France. I just thought it was a school."

Dr. Ross found working with the international student body the most enjoyable and rewarding part of her 30+ years at the school. "I loved being part of the school, the variety of families and interests they had."

She taught Turkish students who escaped over borders and walked through deserts to eventually reach the shores of the U.S. Other students were Africans who were the children of diplomats or the children of the diplomats' chauffeurs. Even the French families from the Hexagon were diverse in many ways. She tells me she remains close friends with some of the families.

The ultimate reward for teaching at the Lycée Français for Dr. Ross was, in her words, the "feeling that I had an impact on students who would be [living] all over the globe."”

Lastly, I ask her to sum up the French philosophy of education. She responds, "Education is the creation of citizens."

Then, her own philosophy. She responds unequivocally: "Education makes us human."