Just what is a "Cannet" and why am I even going there in the first place? Good questions. A week ago I was in Beaulieu-sur-Mer recovering from a fishing expedition with my friend Luc. Suffice to say it truly was an "expedition" and after a sumptuous feast, I felt I needed a week's bed rest. I eventually regained sufficient strength and was able to contact the Marie du Cannet Côte D'Azur hoping that someone in their Tourisme, Hébergement et Restauration Consular section could advise me on a modest hotel in town. I told the chirpy, efficient little voice on the other end of the line that I wanted a room in close proximity to La Fête du Chocolat. That's right folks a chocolate festival high in the hills and the fact that I will be writing a follow-up piece to last year's top gun "chocolatiers de Paris" my attendance was almost mandatory. I was kicking off my own personal cocoa season. Sweet!

To help you all get properly situated, Le Cannet is located in the northern part of la ville de Cannes on the Cote d’Azur. That's right the same Cannes that's usually stuffed with movie stars, glamorous hangers-on, high prices, swarms of paparatzi, bad attitudes, pushy eastern bloc tourists with too much money, flashy cars and overpriced everything. If you're lucky you might even run into a real local who actually speaks who speaks French though I understand they are something of a dying breed. A little family side note. Years ago, my grandparents would take the family, my mother and her brothers and sisters, and summer in the South of France. I mean, don't we all do that? If they weren't suffering in Villefranches they rented a "little flat" in Le Cannet. As a comparison, my paternal grandparents would suffer their summers in Le Touquet-Paris, Plage  at a lovely rented villa. There was no end to their suffering. Now you can appreciate the connection and why I am heading into the hills. For one reason or another, my sainted mother never lost her accent du Midi and as the polite well behaved children that we were, we laughed our heads off whenever my mother would pronounce certain words (une rose comes to mind). We wondered why she could not pronounce here words in French like us, little Parisian smart-ass voyous who knew just about everything there was worth knowing about. End of that story. Cannet was originally part of Cannes but became a commune in 1778 after a crowd of early movie stars, expats, and retirees took to the streets in demonstrations; more than likely they were demanding better pay, less hours and gaz à tous les étages. The town is nestled in the heart of seven hills along a gentle slope with panoramic views of the surrounding countryside. In case you get lost, Cannet is divided into two areas – the old town (vieux Cannet) formerly the ancient village of Castrum de Caneto is, as you might expect, rich with ambiance, cobbled streets with medieval buildings, interesting gateways, delicious little restaurants, the ruins of a chateau and the lovely St. Michel church where you can atone for your last nights' behavior. The newer part of town is the more commercial area and sure enough, you can't turn around without bumping into a tourist and a stupid guide book and clearly one who is not a native of Castrum de Caneto. If you're into hiking, biking, horse-riding and fishing or if your seeking peace and quiet then Le Cannet is perfect especially if you've experienced enough of the hustle and bustle of Cannes, the red carpet, yet another festival for one insane reason the other, the beautiful people, the sun worshipers, the loud and quite often rude pushy tourists with bad attitudes, waxen faces suntanned just right, too much money and dripping in gold from... well, I will let you hazard a guess.
To reach my destination from Cannes, one takes the Boulevard Carnot driving north out of town. Once you reach the rondpoint, or the roundabout or the traffic circle, the road cleverly is renamed Boulevard Sadi Carnot. One small piece of information. If you happen to be driving something less than glitzy (as I normally do) say perhaps a well-used deux Cheveaux you are best advised to leave Cannes as early in the morning as possible so as not to be seen by the glitteratzy. Let me explain. Last year, and this is according to the Nice-Matin, that premier daily covering all the news from the southeast and Corsica that's fit to print, a couple from Moldova in their new-to-you 403 Peugeot, had the misfortune of leaving town during the daylight hours and were pelted with a shower of pebbles and stones by a crowd of, what the Matin described as, beautifully well dressed people. To add insult to injury, a porte-parole for the Commissariat de Police de Cannes commented on the incident by "shrugging" his shoulders and then promptly excusing himself to go to lunch. Get a Rolls Royce or leave town very early. You will thank me.
Miss chirpy voice from the Tourisme, Hébergement was true to her word and arranged a stay for me a charming and quaint little hotel. I say quaint because they still used the minuterie system to efficiently manage their electricity. It's a twist on saving energy where certain lights are timed out, for example one's bathroom. In Paris, you find it in the hallways, stairwells, garages, and other places no one usually frequents. A word about the chocolate festival which is truly "Le rendez-vous des gourmands" and held at the end of March, 10:00 AM sharp! By the time you're starting to enjoy your first cup of coffee with the Matin du Midi, crowds are already gathering at the Place Bellevue and rue Saint-Sauveur. Chocolate-themed events are one of the few times where I don't let children get in my way. I take on a WC Fields mentality, and urge them to take their little sticky fingers and chocolate covered complaining mouths away, far away. I make no apologies when it comes to fine chocolates. 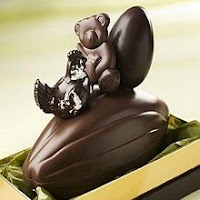 For a chocolate lover, it's a real cocoa high of an event with chocolate sculptors, street artists, chocolate vendors, chocolate fondue stands and samples at every turn. In no time at all, that familiar buzz is with me. I feel dizzy, hands sweating, my heart beating an all out charge, my blood pressure inching up ever higher, my eyes feel as if they were going to pop out of my head. In other words, I was in choco-heaven but it was a high which sadly would not last. Eventually I would sink down into a deep, never ending abyss as my blood sugar desperately attempted to wrestle itself to normalcy. I dragged my sluggish body to the nearest cafe and collapsed in a chair and ordered twin IV's of water and coffee. Oh and un pastis, deux glaçons s'il vous plaît!  Truly a memorable moment.
I resurfaced later that evening and decided that I would try Le Café de la Place on the advice of Mme. Chirpy herself. The restaurant/bistro was in Vieux Cannet so I could roll home if I had to. I found Le Café to be un endroit très sympa in other words a very friendly, welcoming resto. It is a well-kept secret but not for very long I suspect One of their marks of excellence is that they lean heavily on fresh local produce so if you're looking for Maryland crab cakes on the menu, your going to be disappointed. I started with the terrine de foie gras aux figues and I have not had such delicious foie gras in a long-long time and told the owners just that. I then permitted myself to have the pennes al dente au magret fumé (smoked duck breast) and infused with black truffle. Good God! I pinched myself twice to make sure I was truly awake for this piece  or was I heaven looking down. What an amazing dish and if you are a truffle hound as am I you will understand that it was almost better than something else. Thank goodness I had the sense God gave me to order a bottle of nicely chilled champagne Veuve Clicquot Ponsardin because truly, it paired beautifully. It was a perfect moment.It was my very own heaven on earth. As I was eating light, I decided to have their famous Baba au Rhum which is topped with a fine three year old Havana rum. Salud! I had coffee but passed on the little chocolates putting them in my pocket instead. Such willpower!
The next day I was on the morning train to Paris.
https://aubergechezrichard.blogspot.com/
Read more…