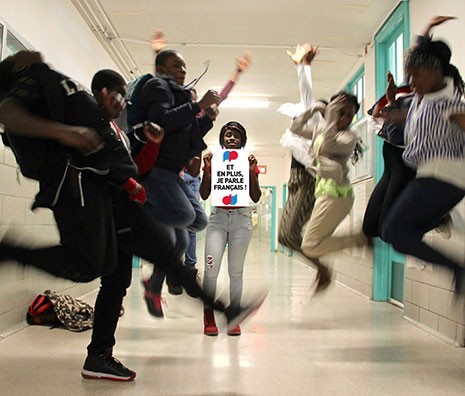 February 21 was International Mother Language Day, the month of February is also Black History Month in the US and March is the month of the Francophonie. Most of our students are at the center of all of these celebrations: they are multilingual, they are black and they are the “Francophonie”, this truly diverse plurilingual and pluricultural space where French cohabits with other languages.

Every year, more and more people around the world join these celebrations and while they are symbolic, they bring into focus the intersection of race, language and culture. I also hope they reflect and prelude a deep and positive shift from a world where there are dominant cultures and marginalized ones, a world where differences are considered a threat, a world in which schooling equals remediation and assimilation, to a world where all cultures are valued equally, a world where differences are assets, a world in which schools acknowledge, value and leverage the wealth of knowledge that every student bring into the classroom.

This shift is needed and necessary especially in schools where we don’t only teach subjects, we also shape and mold the mind of future generations. Around the world today, but especially in big cities, classrooms are global, diverse, multiethnic and multilingual. The most obvious case is New York City, where 43% of the students in the public schools speak another language than English [1].

Our students, especially the ones who recently arrived in this country, are not only learning a new language but they are also navigating new cultural norms but also a new identity, in a socio-economic context which racialize them as Black. Like me, when they left their native country, there were sons and daughters, from a family and a specific village, from an ethnic group with a common language, traditions and values that they carry proudly with them, and all of that defined who they are.

On their way to the “American dream”, these students find themselves in monolingual classrooms where, all of a sudden, their complex and rich identities are too often reduced to being “Black “and “English Learners”.  Unfortunately, none of the boxes they check on the many forms (US entry, schools and colleges, etc..) they must fill out, give them the space to express what they really are: multilingual, from a culture, from countries with a rich history and rich traditions.

Equity, inclusion, access to a high quality education for all, a “Culturally Responsive Education[2]”  seem to be the buzz words these days. The ambition is to see and teach the students in front of us, to meet them where they are, to affirm them, to see their diversity as an asset and not a deficit. In order to meet those goals, we must take our students out of the “black” and “English learners” boxes and allow them to use French as an asset through heritage programs or even better, bilingual programs.

The French language does not belong to France anymore but to the 300 million people who speak it around the world,  (the majority of them soon to be in Africa[3]); among them, our students who form, within their schools, a community, in ways that would not be possible if they were all speaking in their maternal languages. It is often, in French, that our students, from Mali, Senegal, Togo or Ivory Coast find each other and connect in their American schools.

They can access the growing and diverse artistic and literary body of work created, not only by french people but also by French speaking people around the world. Many cultures and languages live within that space called "Francophonie" and this true diversity allows the cohabitation of different views of the world.

Through the French language, students also break racial and socio-economic barriers every day when they meet in bilingual classrooms; when students from a private school in Brittany (France) visit our students in the Bronx and discover their common humanity by sharing and comparing their lives; when our students connect and exchange with students from Lafayette College, getting access to a world their circumstances put out of reach and in return, giving them access to their world while breaking stereotypes.

The benefits of a bilingual education and the maintenance of heritage languages have been proven by researchers and scientists around the world but also by data. If we stop seeing French as the language of the colonizer, the language reserved to a certain elite or the language of France; if we, instead, start seeing it as the language that will propel these students in a globalized future where more than 470 million people will speak it too[4] ( 70% of them will be under 29), a future in which monolingualism means illiteracy, then, giving these students the education they deserve means giving them a bilingual education.