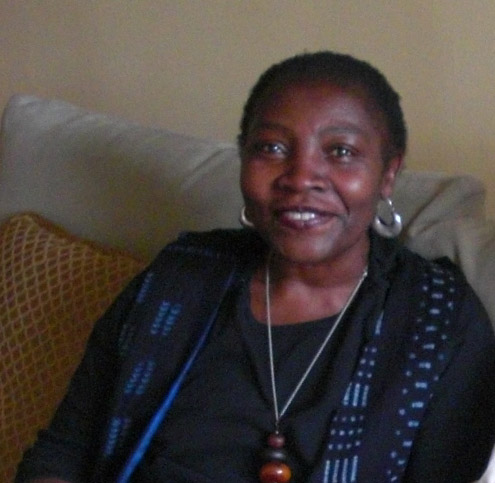 Vickie Frémont has been designing and creating since she was 8 years old, drawing and painting without having ever been taught. At the age of 12 she began to sew, making dolls for her little sister. She was rather shy and spent most of her time as a child alone, reading, writing or knitting, beading… Vickie was born in Cameroon, but left at an early age. With her parents, she lived in Morocco, and many years in the Ivory Coast and in France. She obtained a Bachelor’s degree, in France, and planned to teach Spanish. She also studied anthropology and economics. However, at one point she was working in the neighborhood of the Beaux Arts (fine arts) school and started studying Arts techniques, realizing that there was her calling.

Ten years ago, at a crossroad in her life, she made the momentous decision to move to New York City to further her dream of being engaged in art on a full-time basis. Her first position in the United States was as store manager and buyer for the Museum for African Art, which was at the time located in Soho.

Currently, she designs and makes jewelry and other items, which were also sold at the Soho Museum Store, and can be currently found at the Brooklyn Museum store. She focuses on what she loves: jewelry, bracelets, necklaces, earrings with recycled materials but also with beads, African materials, stones, brass beads etc..; sculptures, puppets, baskets that include beads, textiles, and different kinds of recycled materials such as hangers, cardboard, plastic baskets (for example, strawberry containers). She works with anything that’s easy to carry, to cut or to adjust, clean materials, such as toilet paper rolls that she uses to create dolls or jewelry. Since her position at the Museum for African Art, she has participated in many cultural programs. She participated at Beads, Body and Soul, a Yoruba-theme exhibition; the Hair exhibition; the Baoulé pottery exhibit... In honor of the fiftieth anniversary of Cameroon’s independence, she created a series of puppets representing the ten main regions of Cameroon. She has been featured in the media: in Amina, the most popular African women’s magazine; in television documentaries; the well-known singer, Kaïssa, wears her jewelry.

Her life philosophy is that beauty can be found everywhere. It is a challenge to give a new life to what people call trash. As an educator, she thinks that the progressive transformation of objects is like a miracle, a “re-creation”. She also notices that the activity, for many people helps to restore self-esteem, as it opens a door into the unlimited world of creativity. Her guiding emotion? “To keep a part of my childhood, and to center myself.”

Vickie provides educational programs: The Recycling Art Program. As a young girl, Vickie did not own manufactured toys, but she was happy with her own “made by myself” toys, made with all kinds of materials (stones, wooden sticks, scraps of fabric). She says: “Creating something from ‘nothing’, art from what many would consider trash, is not only a worthwhile undertaking but one that brings personal and mutual pleasure and understanding.”

The program can be adapted for primary school children, high school and college students, teachers, parents, and seniors, people working in stressful occupations. It can be considered a distraction or a recreational activity, but also as training for work with young people. It has been of particular interest to those involved in the fields of education and health.

Her website is http://vickiefremont.com/ and she can be reached by e-mail.