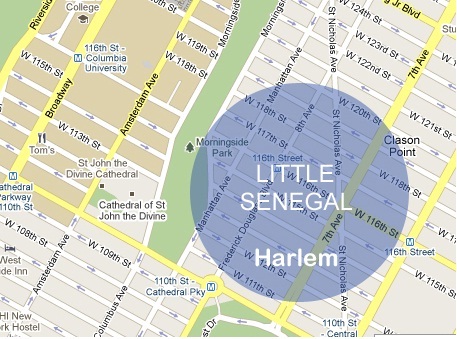 Traditional meat and fish dishes, soccer, industrious film-making, and Tam Tam music are all things that categorize the cultural richness of the Senegalese population, but you don’t have to go all the way to Senegal in order to experience this culture: according to surveys conducted in 2008, there are approximately 12,000 Senegalese-Americans in the United States. Originally coming to the nation as a product of the slave trade the first wave of Senegalese emigrants settled in the southern states of the Carolinas, Georgia, and Louisiana; afterwards, a voluntary emigration to the United States during the 20th Century primarily led the Senegalese population to establish themselves in New York City.

Today, there are approximately 7,000 Senegalese living in New York City, primarily living along 116th Street between St. Nicholas and 8th Avenues, in the neighborhood that is called Little Senegal or Le Petit Sénégal by the francophone population. Although many have assimilated into the American culture, a strong linguistic tie to their native language, Wolof, helps to strengthen the population’s cultural connections to Senegal; this is primarily evident as one strolls through the streets between Lenox/Malcolm X Avenue on the east and Fredrick Douglas Avenue to the west and one notices the numerous Senegalese stores, restaurants, and cafes that are represented in the area, advertised in English, French, and oftentimes, Walof. It is not uncommon to see Arabic as well, as much of the population is Muslim, most practicing at the local mosques like the one located on  137th Street.

Some of the attributes that classify Senegalese Americans living in New York City is their business minded attitude, which is why Ibrahima Diafoune, the president of the Senegalese Association, claims, “that’s why they call it Little Senegal, not Little Mali or Little Guinea.”

For more information on the Senegalese-American population living in New York City, the Association des Senegalaise D’Amerique is a great place to learn about upcoming events around the neighborhood, including English classes, counseling services, and encouraging the production of the Annual African Parade in August, which aims to unite all Africans in the New York City area.

In addition to the cultural center, one can get in touch with the Senegalese tradition through numerous radio broadcasts like Voices of America, or through Senegalese newsletters throughout the City, mostly located in various restaurants and business establishments like Keur Sokhna Restaurant, where in addition satisfying an appetite for food, one can satisfy the appetite to explore another culture in the vibrant cultural mosaic that is New York City.