Idlewild Books, a new bookstore specializing in French,Spanish and Italian literature, officially opened its doors today, February 1st, coinciding with the start of Black History Month. For the whole month of February, Black history will be celebrated in North America. For the occasion, Idlewild highlights a few books in its collection written by Black authors or that treat themes pertaining to black culture worldwide.

For young readers (10 and up) or intermediate level readers: 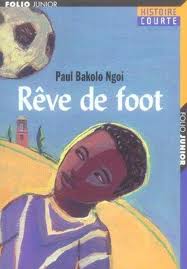 Paul Bakolo Ngoi is an Italian author originally from Congo. He describes himself as having "the virus of writing in his blood". In fact, his grandfather, with whom he shares the same name also gave him the same love for writing, being himself one of the first ever Congolese writers.
In "Rêve de Foot", Ngoi narrates the story of Bilia, a young boy from Kinshasa who has to steal food to survive. Bilia is arrested and imprisoned after having stolen a carton of bananas. One day while in prison, one of the guards decides to organize a soccer match. Bilia is such a talented player that he gets noticed by a European journalist in the crowd who invites him to leave Africa in order to pursue a professional football career in Europe. Is this Bilia's second chance to start a new life? The title alone of this book demands attention. A nameless girl is captured in Africa and transported to Venezuela where she will be bought and called "Ana". She works hard, trying to get used to her new and difficult life. But one day, she is accused of something she hasn't done and decides to take her life into her own hands and escape. This award-winning novel provides a fresh look at the triangular trade and the fight for freedom from the point of view of a young female slave.

Speaking of the idea for this novel, Pascale Maret says, " This novel is set in Venezuela, where I lived for three years. I was inspired by a house from the colonial period, a rare vestige of that time that has survived the modernization of Caracas. My youngest daughter was my model for the young heroin, Ana." Maret treats the theme of slavery with sensitivity and provides a prologue and an epilogue which give the historical context within which her story takes place, an invaluable addition for young readers.
For adults: Ulrich is a biracial boy living in 1930s Germany. He has a German mother and his father is an African soldier who was part of the french army that occupied Germany after the first world war. As nazism rises in Germany, Ulrich will have to tackle many difficulties; the growing resentment towards people of mixed racial heritage seen as "The Black Shame" of Germany, the attempt to sterilize them in order to maintain Aryan purity. How will Ulrich manage in this harsh new reality?
This novel delves into the often-overlooked treatment of Black people in Nazi Germany. Its author, Didier Daeninckx, is known for his historical fictions that often dig deeper into the uncomfortable areas of European History. This humorous books written by Congolese writer and literature professor Alain Mabanckou, plunges the reader into the every day life of the African diaspora of Paris highlighting their diversity. Speaking of his motivation behind Black Bazar, the award-winning author says:"Black people make themselves prisoners of the image white people have of them. So they think they are united, when it really is a patchwork community with disparate interests. I can tell you dozens of differences between Caribbeans, West Africans and Central Africans! That's really what I tried to portray in this novel."
The protagonist is a Congolese dandy whose wife leaves him for a drummer taking their daughter with her. To overcome his sadness, Fessologue (literally "Buttologist"- a name he gives himself from the conviction that he has a knack for guessing a woman's temperament from her derrière) decides to buy a typewriter and starts writing about his everyday life, and the places and people that inhabit it. The characters are witty and larger-than-life making for an enjoyable read. Still, this novel tackles deeper issues like love, sexuality, homesickness, colonization and a man dealing with his own feeling of weakness and cowardice making this novel as touching as it is entertaining.
"Aya" by Marguerite Abouet and Clément Oubrerie People interested in our French language classes will have the chance to discover Aya, the young woman from Côte d'Ivoire whose sole ambition is that of becoming a doctor. Her parents, however, want her to marry a nice  boy that she doesn't like.
This graphic novel set in the capital of Ivory Coast in the late 1970s shatters the conception of African countries crippled by war and poverty and unveils the world of an ordinary African girl who resists parental authority and tries to follow her ambitions in this dynamic and amusing story infused with local slang and African humor.
We look forward to seeing you at our store to pick up your copy or at one of our classes!
*Idlewild*
249 Warren Street (x Court)
Cobble Hill, Brooklyn
(718) 403-9600
www.idlewildbooks.com
E-mail me when people leave their comments –
Follow