“We are pleased to continue expanding our Pre-K Dual Language programs to serve as many children in New York City as possible, and thank Council Member Kallos for his ongoing partnership on early education,” said Josh Wallack Deputy Chancellor, Early Childhood and Student Enrollment

“I hear so many languages spoken in my district from every corner of the world and now we are working with the Francophone community to address a need in the neighborhood as we hope to increase the overall diversity of our schools,” said Council Member Ben Kallos. “Thank you to Deputy Chancellor Josh Wallack for his ongoing partnership in expanding early education opportunities, the French Consulate for supporting the Francophone community, and especially to Stephane Lautner and Catherine Remy who worked closely with my office to put meetings together and organize hundreds of other parents.” 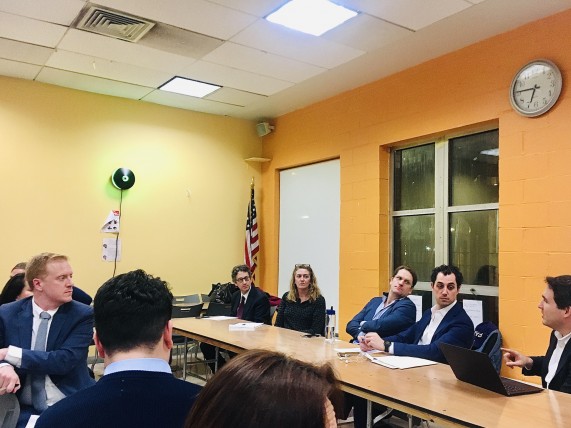 “On behalf of France I want to thank Chancellor Richard A. Carranza for opening the first French Dual Language Program in District 2. This program will not only provide a bilingual education to French Speaking families but also support multiculturalism that is a central feature of New York City’s identity. Let me express my deepest gratitude to Councilmember Ben Kallos whose continued support to this endeavor has been critical. The commitment of the French speaking parents who dedicated countless hours to this French Dual Language program has been truly inspiring and Stéphane Lautner and Catherine Remy deserve special credit for making it happen,” said Anne- Claire Legendre Consul General of France in New York

"Parents across the nation - from all socioeconomic and ethnolinguistic backgrounds - are asking school systems to provide bilingual dual language education. It is a great thing to see New York City embrace this approach and offer dual-language education in French and a dozen other languages."
Fabrice Jaumont, PhD. Education Attaché of the Embassy of France and Author of The Bilingual Revolution.

“The parents of this community had a vision and a desire for bilingual education for their children. The establishment of this Dual Language French UPK program is the culmination of two years of groundwork, involving over 150 families in New York City coming from countries all around the world, interested in having their children learn French. The personal stories of the parents, told during the meetings with the Department of Education and Council Member Kallos, showed the critical link of language in the maintenance of culture, heritage, and identity. The success of this program was possible thanks to the strong partnership and support of Deputy Chancellor Wallack his team at the DOE, Council Member Ben Kallos and his staff, and Maud Maron and the Community Education Council. The guidance of Anne-Claire Legendre, Consul General of France in New York and Fabrice Jaumont of the Embassy of France was invaluable,” said Stephane Lautner parent organizer and local resident. In December 13, 2019, Council Member Kallos joined Community Education District Superintendent Donalda Chumney in a meeting with dozens of parents Stanley Isaacs Center. Following the meeting Council Member Kallos worked with organizers to host a petition when more 200 parents pledged to send their children to a French dual language program. When Council Member Kallos shared the results of the petition, Department of Education requested a meeting with the Francophone community, held again at Stanley Isaacs Neighborhood Center on Tuesday, March 3rd. The meeting was led by Council Member Ben Kallos, Deputy Chancellor of Early Childhood and Student Enrollment Josh Wallack, the Education Attaché of the Embassy of France Fabrice Jaumont, Community Education District 2 President Maud Maron, and Stephane Lautner with attendance by the Executive Superintendent for Manhattan Marisol Rosales and Community Education District 2 Superintendent Donalda Chumney. At the March 3rd meeting French speaking parents from New York City, Canada, Africa, and even France itself made their case for a French dual language program to a receptive Department of Education.

The results of the petition and pledge found:

Year of Birth     Number of Children

“As a multilingual learner and an educator, it is an honor to partner with families across District 2 and Council Member Ben Kallos to launch this French Dual Language Pre-Kindergarten Program, which will enrich the learning opportunities for all our students,” said Marisol Rosales Executive Superintendent for Manhattan.

“The creation of this French dual language pre-k is thanks to the determined and passionate advocacy of the many parents who insisted that dual language instruction is vitally important—both because it provides a 21st century skill and because it helps children remain connected to their multiple heritages and cultures ,” said Community Education Council 2 President Maud Maron.

Council Member Kallos has worked closely with the New York City Department of Education since 2014 to bring Pre-K for All to the Upper East Side and Roosevelt Island, following reporting by WNYC that Yorkville, Lenox Hill and Roosevelt Island had 2,118 four-year-olds and only 123 Pre-Kindergarten seats. Some of the ways his office has done this include identifying parents with four-year-olds who pledged to send their children toPre-K for All, working with schools and providers to become Pre-Kindergarten locations, and working with the Department of Education through the application process to open more seats in the 5th Council District on the Upper East Side and Roosevelt Island. The Upper East Side has added Pre-k seats each of the past five school years and now has a capacity of 2,056 seats.