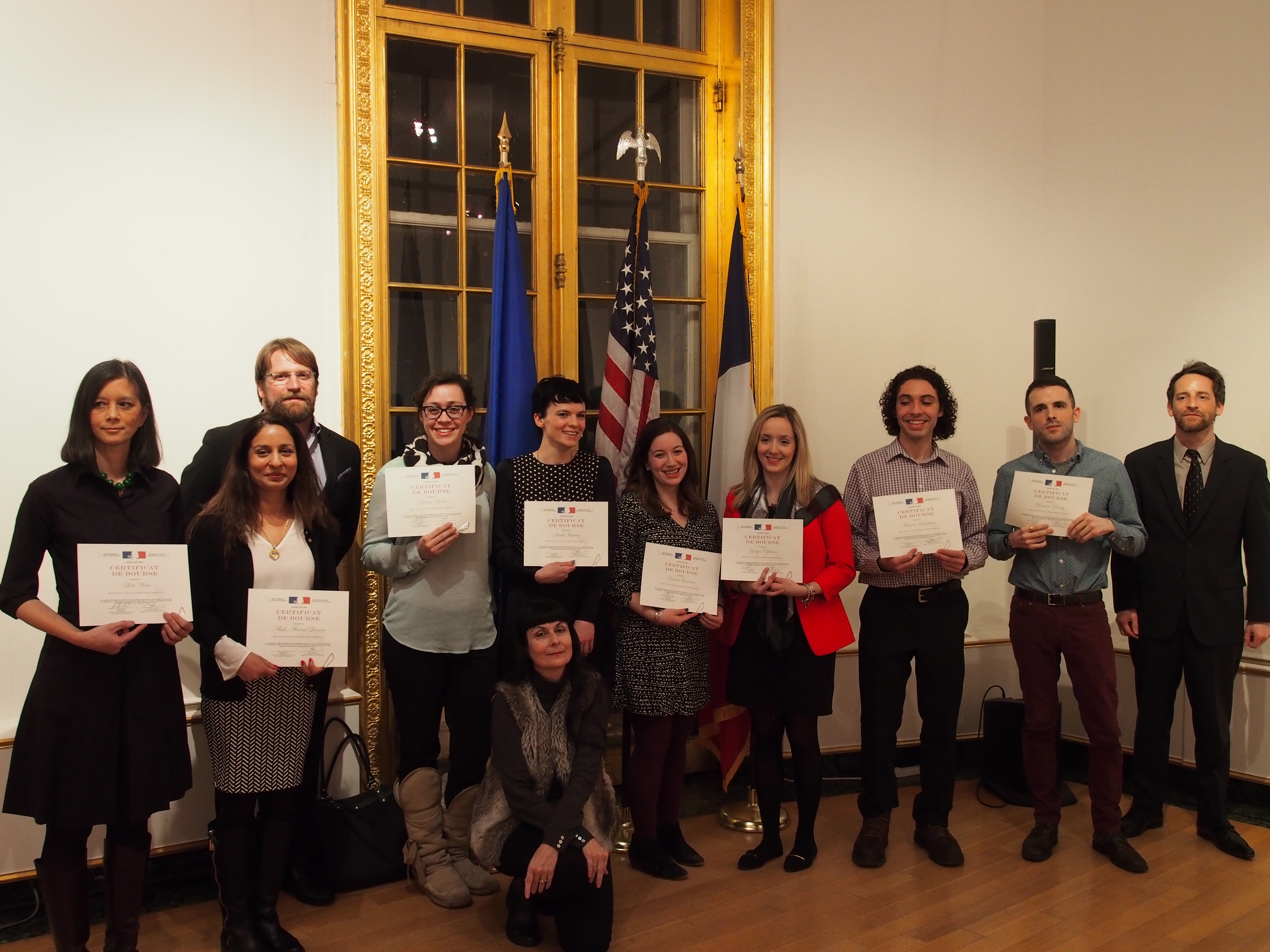 Finding talented and qualified teachers is key to the success of dual language programs. Luckily, a ceremony last week, celebrating the dedication of  current and soon-to-be French teachers confirms that the future for French-English Dual Language Programs in New York is brighter than ever.
.
Thanks to the robust efforts of the Cultural Services of the French Embassy and the French American Cultural Exchange Foundation, paired with the support of community members and that of la Société des Professeurs Français et Francophones d'Amérique (SPFFA), the relationship that dates back to that of the American Revolution is being solidified today.
. 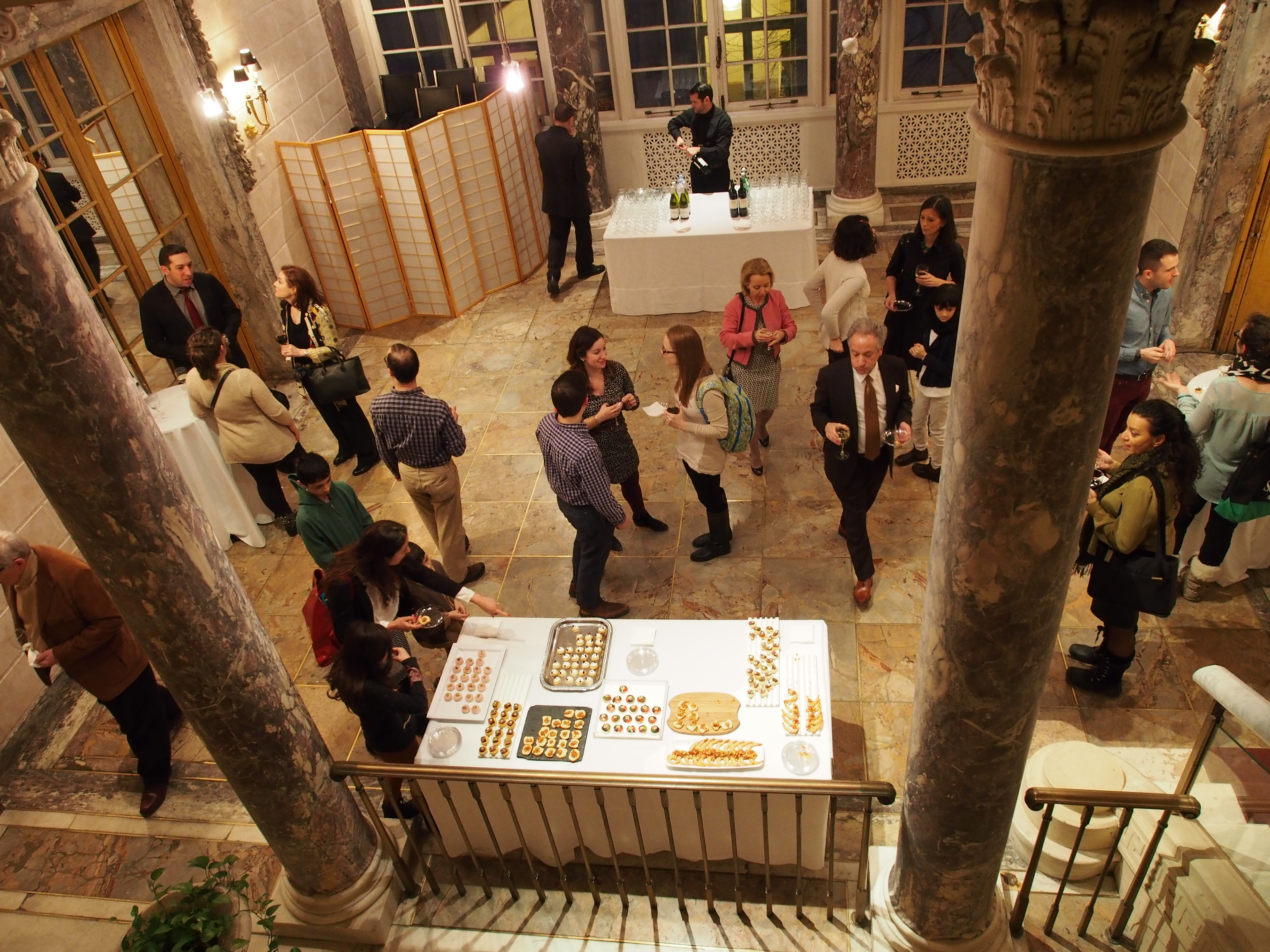 At a ceremony, 9 individuals studying to be French teachers were awarded with scholarships from these organizations. Deputy Cultural Counselor, Thomas Michelon, urged the teachers to, 'nurture our children, and to carry the momentum of the evening into NYC classrooms, into other States, and for generations to come.’ As many of the teachers of the awardees sat in the audience, eyes gleaming with pride, there is no doubt that in generations to come, the awardees will repeat the cycle with their own students.
.
.
.
.
. 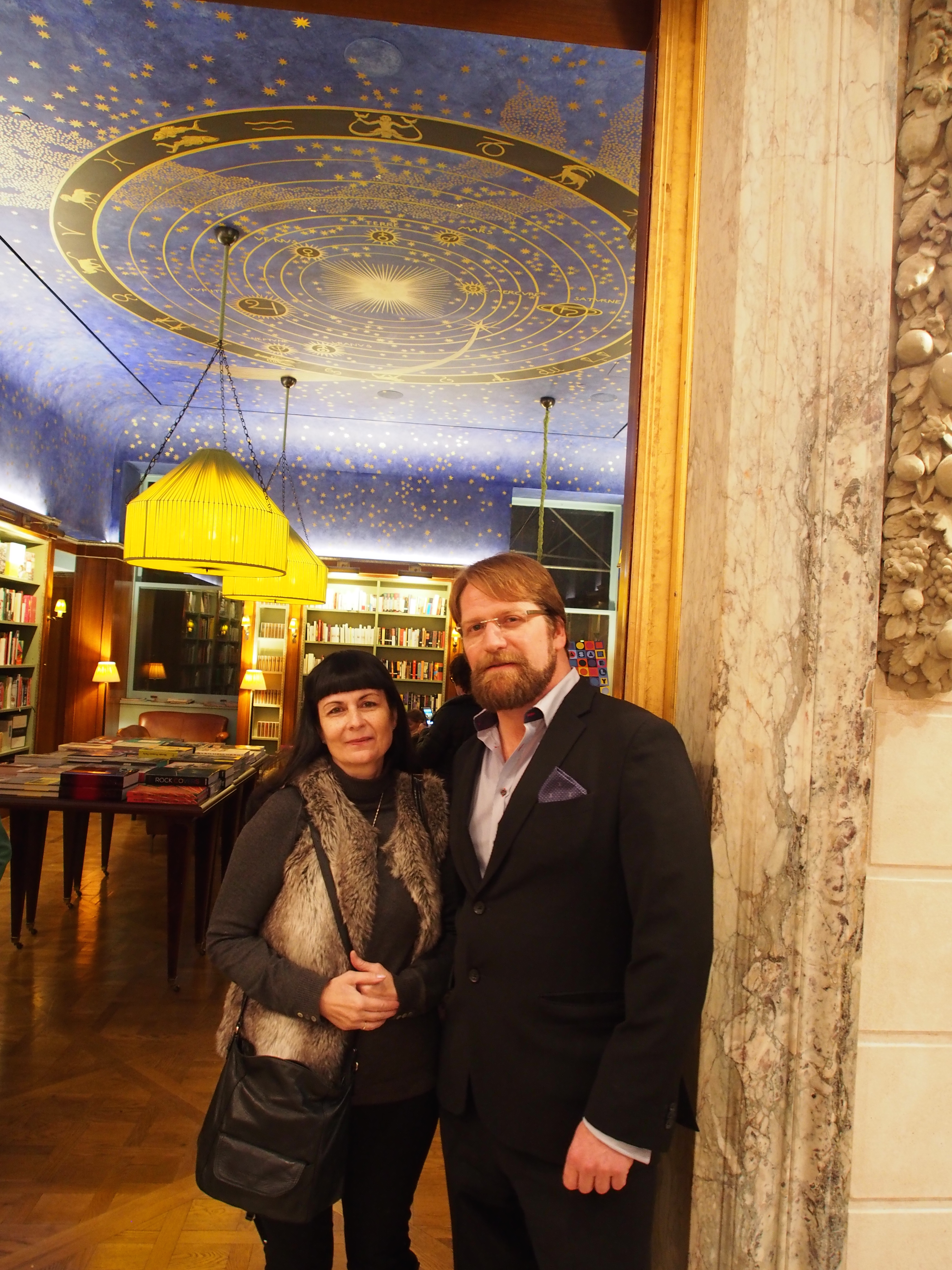 The $5,000 each awardee was granted not only serves as a facilitator for their education, but also as a reminder of how highly valued they are in today’s increasingly francophile climate. Fabrice Jaumont, whom the NY Times coined the ‘Godfather’ of this Bilingual Revolution reminds us that just 8 years ago in 2007, a single teacher was the pioneer for this movement. Over the course of those 8 years, the interest and support has multiplied to over 60 teachers in 12 schools in NYC and beyond. Beyond, meaning a growing interest across the country, as in Texas, for example, where a recent conference in Houston continuously cited Brooklyn as the role model for their own French Dual Language Programs.
Anne Berthelot, President of SPFFA (a non-profit founded in 1904), claimed that the organization's main ‘raison d’être’, is to give out scholarships to students who seek to conduct their research in France or Quebec, including six of those at the ceremony, as the main contributor of the awards.
.
.
.
.
SPFAA President Anne Berthelot with Education Attaché Fabrice Jaumont
.
.
.
.
.
Of course, the honorees all have interesting stories that led them to the stage that evening; let’s take a look into their lives: .
.
.
Heydya Chibane
Heydya was born in Algeria and came to the United States at the age of five. At that point, she didn’t really speak English and understands the struggles of being immersed in another culture as a child. After attaining a journalism degree, Heydya returned to school to pursue her true passion: teaching. To her students, she wants to transmit the "importance of not losing one’s culture, feeling comfortable, and appreciating the beauty of American diversity as the melting pot of the world."
.
.
.
.
.
.
.
.
.
.
.
.
.
.
. Valerie Connor
Currently a Kindergarten teacher at P.S. 58, Valerie was hired on a whim a month into the school year. She is passionate about teaching her 25 students, half of which are anglophones and the other half francophones. Valerie claims that French has ‘brought her places she never expected to go..I studied abroad in France and then nannied two children there, this is totally different from the experiences I had where I’m from in Upstate New York”
.
.
.
.
.
.
.
.
.
.
.
.
.
.
.
. Sarah Fromentin
Sarah is French-American. We met in her classroom at PS 133 last year when she told me that ‘up until she was a teacher, she had always preferred to celebrate her American side’, this year, she says, “I’ve learned how to balance the two.”  As she continues her studies at Hunter, Sarah is learning more about bilingualism and the theories behind it, which she is able to transmit to her students. “I’m able to teach in a way that the kids don’t have to reject either language in order to be bilingual…It’s something I wish I had when I was younger.” She encourages other instructors who are bilingual to use it to their advantage in the classroom, “It’s a huge talent, something to be cultivated”. Laura Head
Laura has been in NYC for the past 6 months, where she moved after being offered a job at P.S. 110. Before then, she called Paris home, where she worked on evaluating the French need for the English language and its impact on the economy. At P.S. 110, Laura has found the ‘perfect niche’ as a 3rd grade bilingual teacher. She loves the freedom and jurisdiction she is given in promoting bilingualism in the classroom and is appreciative of being at the ‘foundation of a developing Revolution.' 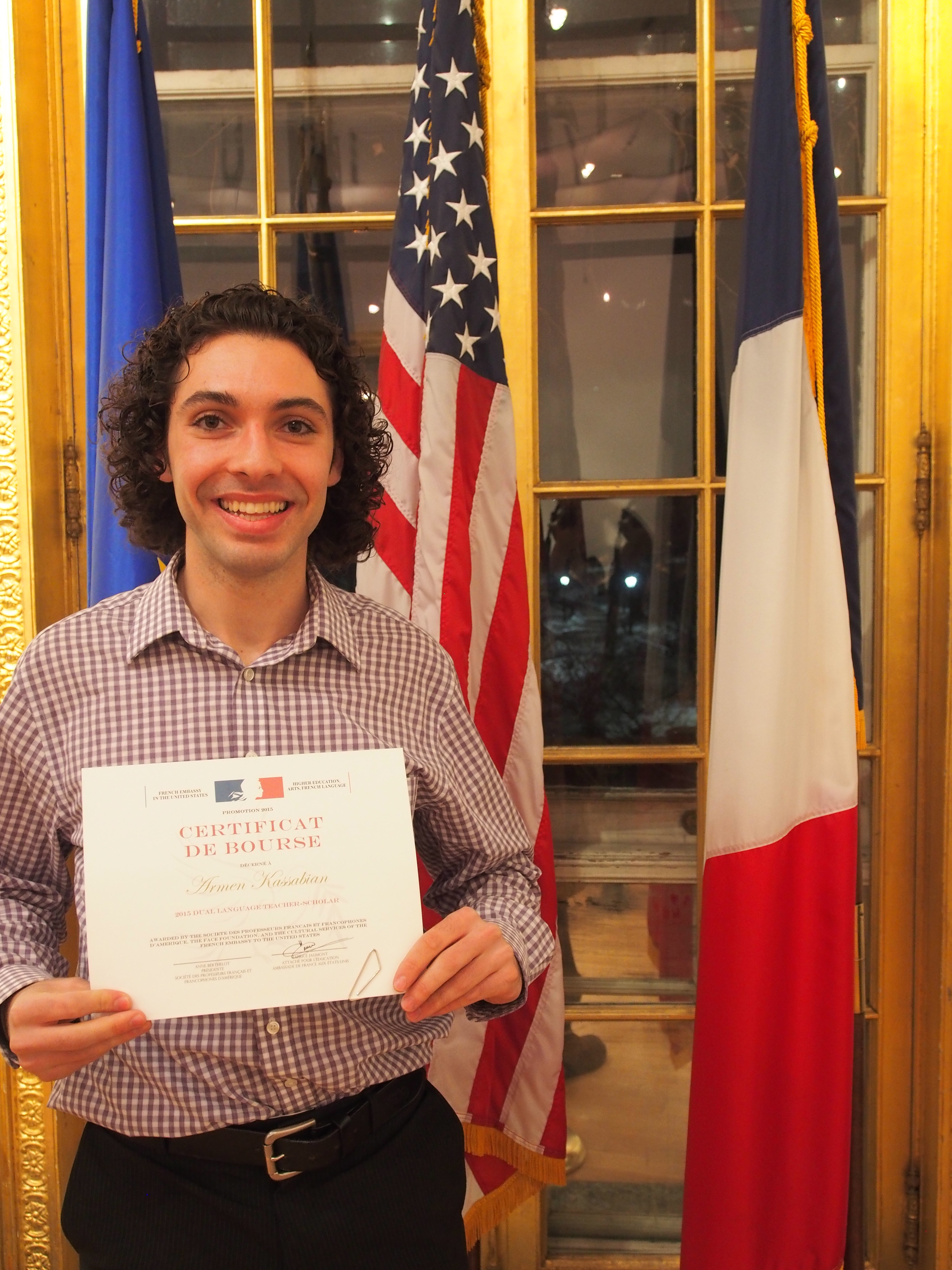 Armen Kassabian
Armen is an Armenian-American who grew up visiting his family in Montreal. The French influence there, paired with his enrollment in a French sailing camp in Brittany at the age of 14 and three years thereafter truly immersed him in francophone life. “I’m mostly interested in the francophone world.. I studied abroad in the Dominican Republic and made a lot of Haitian friends..I can speak Creole now.” His accomplishments extend beyond sailing and polylinguism — Armen is a Fulbright scholar, taught English in Martinique, knows sign language, has written two books, and is a Tai Chi and Yoga instructor, all talents and skills which he wants to bring into the classroom.
**Armen's book, which will be out on Amazon Kindle's is called: "Beyond the 'to be' Syndrome: An Alternative Method to Teaching Language"
.fd
.
.
.
.
.
.
.
.
.
.
.
.
.
. Aliya Ahmad Quentin
Aliya’s ties to French go back to her time in Pakistan where she’s from. There she attained a Master’s degree in French
Literature and taught mostly to adults. When she moved to Nigeria, she taught French for four years, and upon her arrival in the United States gained an interest in shifting her focus from adults to children — after teaching toddlers at La Pétite Ecole in Manhattan, she has begun a new Master’s program, which she is passionate about, giving her the opportunity to pursue her passion for teaching older children in the United States.
.
.
.
.
.
.
.
Here are the names of the 9 recipients

.
.
.
This scholarship program comes as the French-speaking community´s contribution in support of the expansion of DLPs in New York, embodied by Chancellor Farina´s leadership and vision. It accompanies other initiatives which support schools with French DLPs, such as the FACE Foundation-French Embassy's. French books and resources, the teacher development program, the EFNY parent empowerment and advocacy program, and other enrichment activities are sponsored on a regular basis by many organizations.

Through collective efforts, New York´s French-speaking communities want to show their appreciation for NYC´s school leaders, staff, and teachers who offer them much-needed dual language education, which, in their eyes, offers an excellent solution towards preserving their heritage and raising their children bilingual, biliterate, and multicural. It is their hope that more schools will soon offer a French DLP to NYC´s 120,000 Francophones and countless Francophiles.
.
.
View our diaporama below
-----------------------------------------------------

If you would like to donate to the French American Cultural Exchange (FACE) to support the French Dual Language Programs in New York City Public Schools, simply click on the following link. As a donor you, will receive an automated tax receipt as well as a recognition letter from FACE.
All donations are tax deductible.

There are two ways you can contribute:

• Donate online at your own convenience at
donatenow.networkforgood.org/face

Thank you for your support!

These donations are used to purchase textbooks and materials for classrooms, and to fund scholarships and teacher development programs.