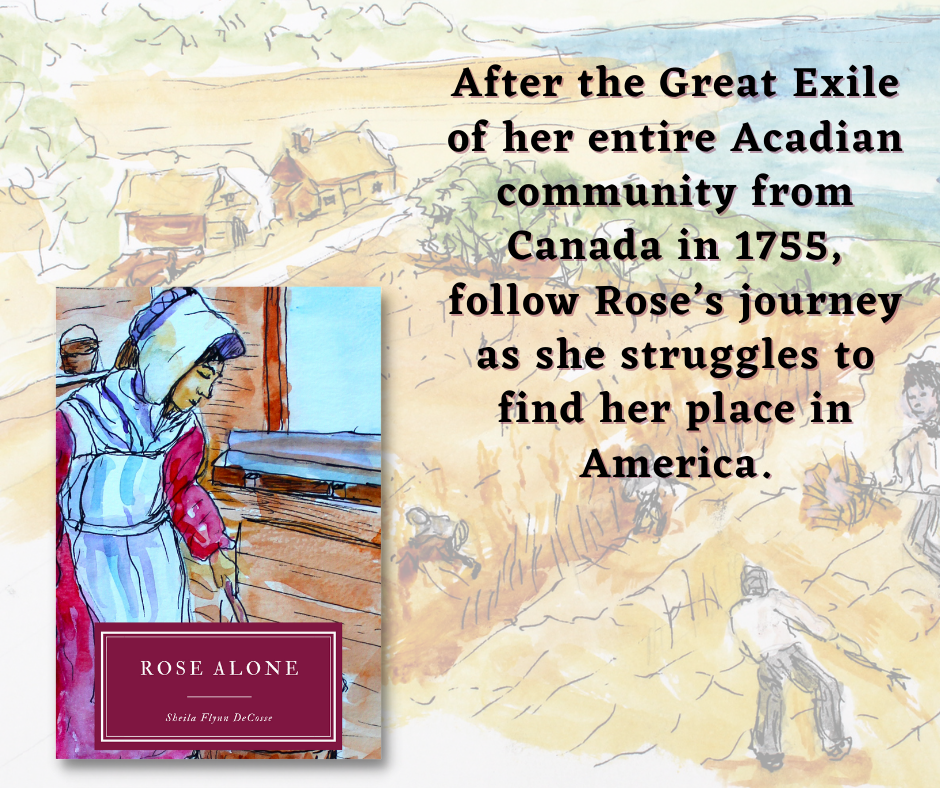 “I think I was born to be a writer,” Sheila Flynn DeCosse states when I ask her what started her on the path to being the published author of non-fiction work, adult and children's literature–most recently the fictional Rose Alone, out this year from TBR Books. “When I was young, I picked up a pen or went to the typewriter. In high school, I wrote poems, stories. I was on the board of a literary magazine in college.”

It was not only this love of writing and imagination that marked DeCosse, but later, she would conduct research on and interviews of teachers and local notables in the communities where she lived in New York's Long Island, publishing them in area papers. She even penned fine arts reviews of pieces presented in Soho galleries, featured in art magazines. This “sense of history”, as she puts it, informed her creation of Rose Alone, a tale inspired by the forced exodus of French Acadians from Canada by the British in the mid-18th century.

Her son, a reporter in East Hampton, tipped her off that there were Acadians who long ago had been resettled in that Long Island town. This prompted DeCosse to do the research that resulted in this current piece of historical fiction, illustrated by Teresa Lawler and a new release by TBR Books, the publishing arm of New York and Paris’ CALEC–The Center for the Advancement of Languages, Education and Communities. In a way, this was a return to material she loved reading as a child, namely Marjorie DiAngeli's picture books about international youth, in particular a story called Petite Susanne, which recounted the wholesome, simple life of a little girl on the Gaspé Peninsula of Eastern Canada.

DeCosse also cites an urge to communicate–to share with others things of note she has discovered, as why she continues to be inspired to pick up the pen. “I'm observant of people,” DeCosse acknowledges, adding that her sympathetic manner tends to encourage those around her to talk about themselves. Some of the research for Rose Alone took DeCosse directly to Acadia, in Canada, from where she compiled nearly 4 pages worth of a bibliography on writings and records. It was important for her, as a writer, to give some backstory to the character Rose, her family and her culture in Acadia, while also moving quickly to the horrible experience the family has in the 1755 historical event known in French as Le grand dérangement (loosely translated as “the great disturbance”).

When queried about why this book now, DeCosse didn't hesitate to respond that it speaks to the "innocent people [who] have been ripped away from their homelands and thrust into very difficult circumstances. Do they hold onto their culture?” She mentioned the past few hundred years, but one can see this recurring in the past few months of 2022 with the war in Ukraine. For Rose, “her family and society were everything for her.” DeCosse explains that even though Rose had a challenging time, to say the least, in East Hampton, she found people of different nationalities who were good to her, and this broadened her mind. A very kind teacher, who became a kind of mentor to her, encourages her to learn English for her societal survival in the U.S. This central message is what DeCosse wants us to take away from her latest book–this opening of the mind, this understanding of different cultural perspectives that Rose comes to achieve.

DeCosse tells me of a sequence in Rose Alone that encapsulates this for her: Rose is offered a chance to escape the home where she has become a servant, but stays to save the life of her mistress, who has fallen ill. It is this realization that is of vital importance to DeCosse–that someone can come from a different country, speak a different language, and be a good person. Rose’s mistress treated her well, so Rose responded in kind, even though they came from different cultural worlds. Asked about the literary influences that shaped her writing, include Rose Alone, DeCosse talks about her Irish heritage having pushed her towards writers like William Trevor, James Joyce– particularly the short stories in Dubliners; the poetry of William Butler Yeats, as she finds this has brought a poetic sensibility to her prose. Her interest in stories of immigration perhaps came from her readings of Willa Cather’s novels, such as the iconic My Ántonia.

She also mentions the French writer and posthumous 21st-century sensation Irène Nemirovksy, whose Suite Française struck DeCosse because of its focus on the community around the writer during the German occupation of France in World War II, without explicitly describing the horrors of that period. More towards her main genre, her favorite children's historical fiction authors are Katherine Patterson and Ruth Sepetys. Rose Alone is somewhat of a departure from these shorter writings of hers–short stories based on more rapid character arcs. “There is some character change in this novel,” admits DeCosse, “but it is more culturally based. This novel became more of a cultural exploration.” Something we all need more of in today's world.