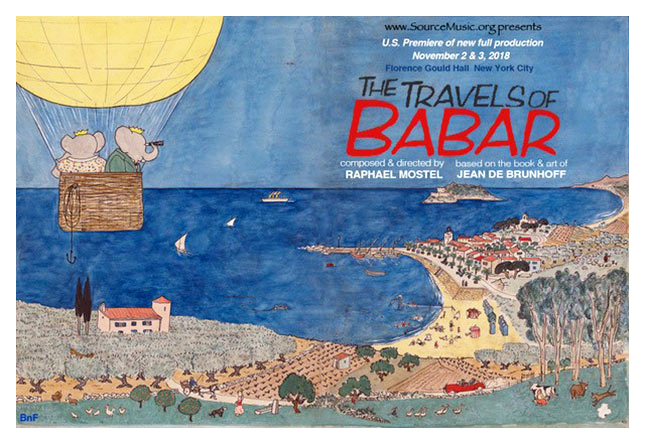 The first performance in the U.S. of the new production of American composer Raphael Mostel’s“Travels of Babar,”a multi-media composition based on Jean de Brunhoff’s classic picture-book of the same name, “Le Voyage de Babar,” will be presented at Florence Gould Hall in New York City on November 2 (in French) and 3 (in English), 2018.

The first 60 persons who will request an invitation by email with the code #NewYorkInFrench will receive an invitation for two for one of the performances (based on availability): email press@thirtyseveneast.com

What: US. Premiere of new production of the “Travels of Babar

Fresh from its universally-acclaimed, sold-out debut in Europe by the Berliner Philharmoniker ("Shouts of Joy!" wrote Musik Heute [Music Today]), composer Raphael Mostel's new "Travels of Babar" is presented by Source Music, Inc. complete in its original scoring for eight musicians and narrator, in the full new HD multi-media production using the original watercolors of Jean de Brunhoff’s illustrations for the first time.

Raphael Mostel's hour-long show is based on the much-loved classic picture-book of the same name by Jean de Brunhoff. In Berlin, critics, such as the reviewer for WDR3 [German radio], were “amazed — because the audience’s concentration lasted an insanely long time! …the kids were really engaged. Mostel drew so many colors from the eight musicians.”All three performances will be narrated by Leah Pisar, who has been narrating the text written by her late father for Leonard Bernstein’s Symphony No. 3, “Kaddish”,with orchestras throughout the world.

Mostel’s new production embeds the original images with musicians performing his composition, theatrical lighting, and a narrator reading de Brunhoff’s original text. Mostel’s score was originally commissioned and recorded for Japan in 1994, and his "Travels of Babar" was first publicly performed in California and New York in 1998. The Berliner Philharmoniker presented the first performance of the new production of the complete work in 2017.

“I composed one scene for each of the 46 illustrations of the book, with music as wide-ranging as this humorously wild story. I have now enriched that musical travelogue with an elaborate visual production using Jean de Brunhoff’s original watercolors of the famous illustrations, so this production has become an adventurous ‘voyage’ within ‘Le Voyage de Babar,’” Mostel explains. “Even those who think they know the book well may be surprised at the many details in the original watercolors. The Berliner Philharmoniker’s staff and crew compared the experience to watching a film being edited live in real time,”the composer adds.

Calling Jean de Brunhoff "the father of the modern picture-book," Maurice Sendak wrote "Babar is at the very heart of my conception of what turns a picture book into a work of art. My favorite among Jean's books, The Travels of Babar, is full of alarming and very amusing twists of fate… dazzling, dramatic."

Laurent De Brunhoff, the 93-year-young son of Jean de Brunhoff who wrote and illustrated more than 45 additional Babar books after his father died, is scheduled to attend the performance on November 2nd and will autograph books afterwards.

Raphael Mostel’s “Travels of Babar” is one of the rare handful of musical works that appeals to a general audience of all ages — young, old and in-between — and all levels of sophistication. Mostel's composition mirrors the inventiveness of de Brunhoff's illustrations, using each to showcase different elements of music, turning the "alarming and very amusing twists of fate" into seductive, wide-ranging voyage through the wonders and power of concert music.

The score will be performed by eight musicians representing an orchestra in miniature: two winds (clarinet/bass clarinet and bassoon), two brass (cornet, trombone/bass trombone), two strings (viola and cello), plus piano/celesta and percussion. The ensemble, selected by the composer, includes such noted virtuosos as the pianist Taka Kigawa, and will be conducted by Neal Goren.

Mostel has also created new version for full orchestra of his Babar, that was first introduced by the Orchestre symphonique de Montréal, and the New York Philharmonic performed excerpts. The first U.S. performance of the new version for full orchestra will be presented by the National Symphony Orchestra at the John F. Kennedy Center in Washington D.C. next April 7, 2019

French composer Francis Poulenc was the first to set a Babar story in 1940, “L’Histoire de Babar” (the first book by de Brunhoff), which tells the story of the childhood and adolescence of the famous elephant until he marries Celeste. Mostel continues the musical history of Babar by setting “Le Voyage de Babar,” (de Brunhoff’s second book) which picks up the story when these fanciful elephants leave in a balloon on their honeymoon and subsequent adventures to return home. When the Orchestre Symphonique de Montréal introduced the new version for orchestra of Mostel’s composition, they performed both Poulenc’s and Mostel’s Babars on the same program.

About Raphael Mostel: Raphael Mostel is a composer, writer and lecturer based in New York City. His works have recently been performed by the Berliner Philharmoniker, New York Philharmonic, Orchestre Symphonique de Montréal, New York City Opera, the combined brass of the Chicago Symphony and Royal Concertgebouw orchestras. Mostel also founded the Tibetan Singing Bowl Ensemble: New Music for Old Instruments for which he composed a large repertoire that has been frequently broadcast live on WNYC and NPR. Mostel’s compositions were also performed at the atom bomb commemorations at Hiroshima and Nagasaki in Japan and honored with a retrospective exhibition at the Performing Arts Library at Lincoln Center.

For over a decade, Mostel has also been co-teaching the “Architectonics of Music” Advanced Studio with architect Steven Holl at Columbia University’s Graduate School of Architecture Planning and Preservation, as well as consulting on a number of Holl’s projects. This past month “Architectonics of Music”was awarded (by anonymous submission) the Studio Prize as top class in the U.S. by Architecture Magazine, the journal of the AIA.

About Leah Pisar: An American in Paris and a Parisian in New York, Leah Pisar’s life has been a tale of two cultures. She is currently Chair of the Aladdin Project, which seeks to combat extremism by building bridges of knowledge among Jews, Christians and Muslims. A political scientist with expertise in transatlantic relations, she also writes, teaches and is a frequent news commentator. She regularly narrates for major orchestras around the world, with her mother, the text written by her father, one of the youngest survivors of Auschwitz, for Leonard Bernstein’s Symphony No. 3, “Kaddish”, and is also working on a family memoir. Leah Pisar served on the staff of President Clinton’s National Security Council and the Department of State and the U.S. Embassy in Paris. She holds a BA from Harvard College, a master’s from the Institut d’Études Politiques of Paris and a PhD from the University of Paris. She serves on the board of the French Institute-Alliance Française as well as other cultural and advocacy organizations. She regularly reads Babar stories to her young son in both English and in French.

Source Music, Inc. — www.SourceMusic.org— is presenting these U.S. Premiere performances of the new production of “The Travels of Babar” by Raphael Mostel at Florence Gould Hall with funding from The Florence Gould Foundation.