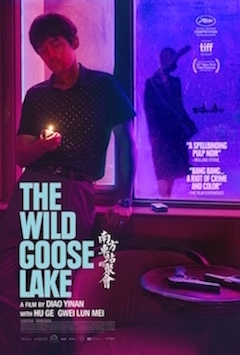 Set in the nooks and crannies of densely populated Wuhan in central China, the film’s sensibility manages to be both elegant and down-and-dirty. It follows the desperate attempts of small-time mob boss Zhou Zenong (the charismatic Hu Ge) to stay alive after he mistakenly kills a cop and a dead-or-alive reward is put on his head. Director Diao (UNIFORM; NIGHT TRAIN; BLACK COAL, THIN ICE) proves his action bona fides in a series of stylized set pieces and violent shocks as a romance forms between Zhou and a mysterious young woman (Gwei Lun-mei) who’s out to either help or betray him. Diao deftly keeps multiple characters and chronologies spinning, while examining social change in contemporary China. Chaotic and nocturnal, THE WILD GOOSE LAKE is punctuated by long pursuits and stunningly choreographed gang fights, in a filmic geometry of arresting beauty and originality.

Diao Yinan was born in Xi'an, China, and studied dramatic literature at the Central Academy of Drama in Beijing. He has directed the features Uniform, Night Train, and Black Coal, Thin Ice. THE WILD GOOSE LAKE is a box office sensation in China, having grossed $23 million in its first week of release. French Academy Award winning producer Alexandre Mallet-Guy also served as co-producer on the film.

"Diao Yinan delivers a definitive Chinese crime noir, in which the ravishing style and inventive staging form the substance. Staged and executed with...slick, dark dazzle. Reteaming with cinematographer Dong Jinsong, Diao shows an extraordinarily elastic mastery of form. THE WILD GOOSE LAKE is like an organic feature of the Chinese cinematic landscape, as though it pooled onto the screen in all its oily, murky glory, having welled up from deep inside the ground. Suddenly, China feels like the noirest place on Earth.” — Jessica Kiang, Variety