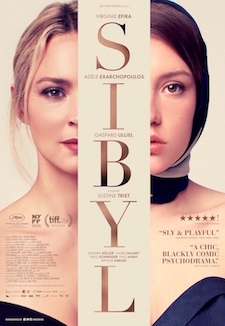 Music Box Films is proud to announce that French director Justine Triet’s darkly comic psychodrama SIBYL, a selection of the Cannes, Toronto and New York Film Festivals, will be released in New York and Los Angeles on Friday, September 11 at Film at Lincoln Center and Laemmle's Virtual Cinemas, followed by other top markets throughout the US.

Sibyl (Virginie Efira), a jaded psychotherapist, abruptly decides to leave her practice to return to her first passion: writing. But her newest patient Margot (Adèle Exarchopoulos), a troubled up-and-coming actress, proves to be a source of inspiration that is far too tempting. Fascinated to the point of obsession, Sibyl becomes increasingly involved in Margot’s tumultuous life while negotiating her own demons.

In her second collaboration with rising star Virginie Efira, writer-director Justine Triet has created heroines of intense complexity, seamlessly intertwining past and present while maintaining a delicate balance between drama and acidic farce.