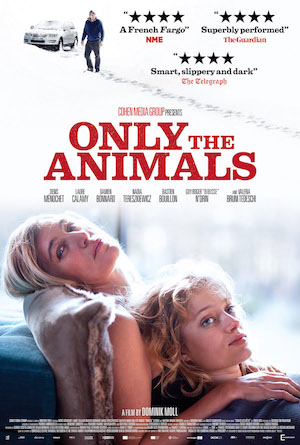 Cohen Media Group is proud to announce the Friday, October 29th release of the dark  thriller ONLY THE ANIMALS, directed and written by French director Dominik Moll (With a Friend like Harry), starring Valeria Bruni Tedeschi, Denis Ménochet and Laure Calamy in New York (Quad Cinema) and Los Angeles (Nuart), followed by additional cities.
Following the disappearance of the glamorous and secretive Evelyne Ducat (Valeria Bruni Tedeschi) during a blizzard in the highlands of southern France, the lives of five people inextricably linked to Evelyne are brought together to devastating effect as the local police investigate the case.
Divided into five chapters, writer-director Dominik Moll’s murder mystery features a sophisticated multi-pronged narrative structure that keeps viewers on the edge. Switching viewpoints, it gradually reveals the secret connections between a lonely farmer, an unfaithful husband and wife, a lovelorn waitress and an African internet scam artist, exposing a world of greed, lust, betrayal, and loneliness, from isolated French mountain villages to the bustling streets of Abidjan.
After growing up in Germany and France, Dominik Moll studied film at City College in New York and the French National Film School IDHEC (now called FEMIS).  A regular of the Cannes, Berlin, and Venice Film Festivals, he is best known for his dark hit comedy With a Friend Like Harry, winner of four Césars including Best Director, and the psychological thriller Lemming starring Charlotte Gainsbourg.
"Like ‘Fargo' remixed with ‘Babel' by way of Atom Egoyan... starts off as an intimate rural mystery and blossoms into a global affair where several strangers wind up connected in unexpected ways.” —  Jordan Mintzer, The Hollywood Reporter
"Moll has given us this audacious, witty, and absorbing mystery thriller, a tale of adultery, and amour fou, with a gamey touch of the macabre.” — Peter Bradshaw, The Guardian
E-mail me when people leave their comments –
Follow