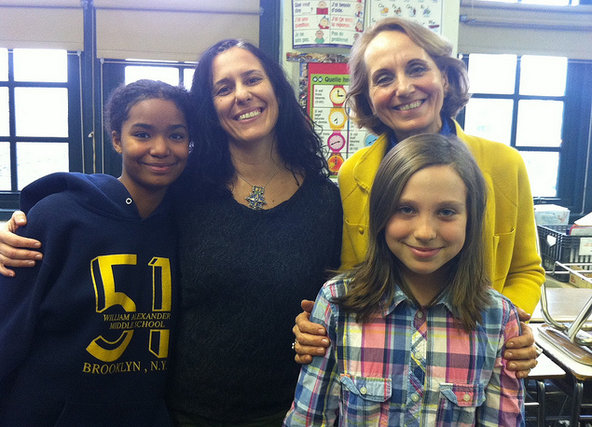 Abigail Meisel for SchoolBookHale Sheffield and Maya Foxman (front, left to right) with their French teachers Alessandra De Meo (left) and Brigitte De Wever, after learning about their award.

The French Embassy in New York has chosen two students from a Brooklyn middle school, M.S. 51 William Alexander, as winners in a trans-Atlantic competition to create an original artwork in celebration of the Statue of Liberty’s 125th anniversary and French-American friendship.

The schoolmates, a seventh grader, Hale Sheffield, and a sixth grader, Maya Foxman, were among 20 winners, all French and American schoolchildren, chosen from a pool of more than 4,000 students, ranging in age from pre-K to 12th grade, the embassy announced on Friday.

Named “Rock the Statue Green,” the environmentally minded contest called for creations made from recycled or green materials. But it also accepted performance-based projects, like songs and interpretive dances, while budding belletrists were allowed to submit essays linking the statue to an environmental theme. All entries were submitted electronically.

“I was just getting into school when I saw all these texts from my mom, saying I’d won,” Hale said. “I thought, ‘Well it’s not April Fool’s Day, so maybe this is true!’ ”

An aspiring singer-songwriter, Hale won a grand prize of round-trip tickets for two to Paris with her video featuring an untitled paean to the statue, which begins: “The story of her is the story of change. You can’t tell me you don’t know her name.”

Maya earned a “coup de coeur” (the equivalent of an honorable mention) with her Claymation video “Homegrown Liberty,” depicting a house plant morphing into the image of the statue. She created the animation using the editing software iMovie, which she learned about at an after-school workshop in animation.

M.S. 51 is a school for the gifted and talented that specializes in performing and visual arts, the principal, Lenore Di Leo Berner, said.

“We encouraged children to see the Statue of Liberty as a new symbol of protection for the environment,” said Fabrice Jaumont, education attaché at the French Embassy. “We received an overwhelming number of submissions and then we tried to make an impossible choice.”

Abigail Meisel was a teacher for 10 years and now frequently writes about education.