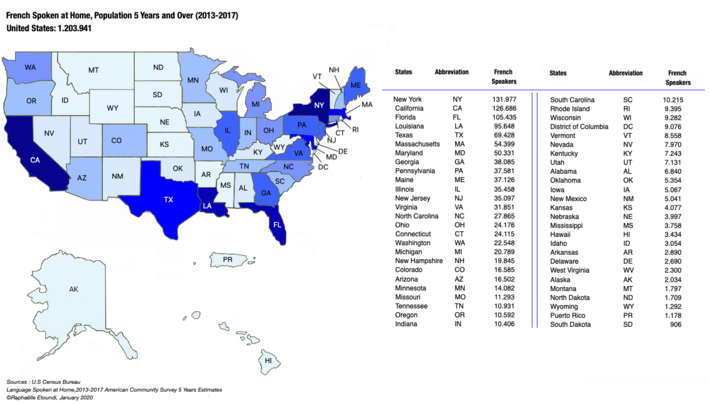 The latest U.S. Census Bureau American Community Survey reports that 1,203,941 people in the U.S. speak French at home.This includes speakers of French Patois and Cajun.  These individuals are over 5 years old (count another 4.6% if you want to include children under 5, or 55,380 children). Despite a drop since my last count, French is still the fifth most common non-English language spoken in U.S. households, after Spanish, Chinese, Vietnamese, and Tagalog.

Francophone communities in the United States have many different historical and geographic origins.Some Francophone communities trace their lineage as far back as the seventeenth and eighteenth centuries, when settlers and refugees immigrated from Europe and Canada. These groups, such as the Acadians of Maine and Louisiana have passed their language down through the generations.The US Census reports 7,997,196 individuals with French ancestry, and an additional 2,109,242 reporting French-Canadian ancestry (2013-2017 American Community Survey).

Franco-American communities long-established in New England and Maine, most notably the Cajuns and Houma people of Louisiana, and the Franco-Americans in Maine, have begun to revitalize the French language after years of neglect due to prolonged discrimination within their local communities. Meanwhile, French parents within expatriate communities have managed to create bilingual programs and promote French after-school instruction in public schools in urban centers such as New York, Miami, Houston, Boston, Los Angeles, San Francisco, and other areas which stand out on the map above. Together these groups form a diverse community of heritage language speakers who maintain a strong connection to the French language, making it one of the most vibrant languages spoken everyday in the United States.