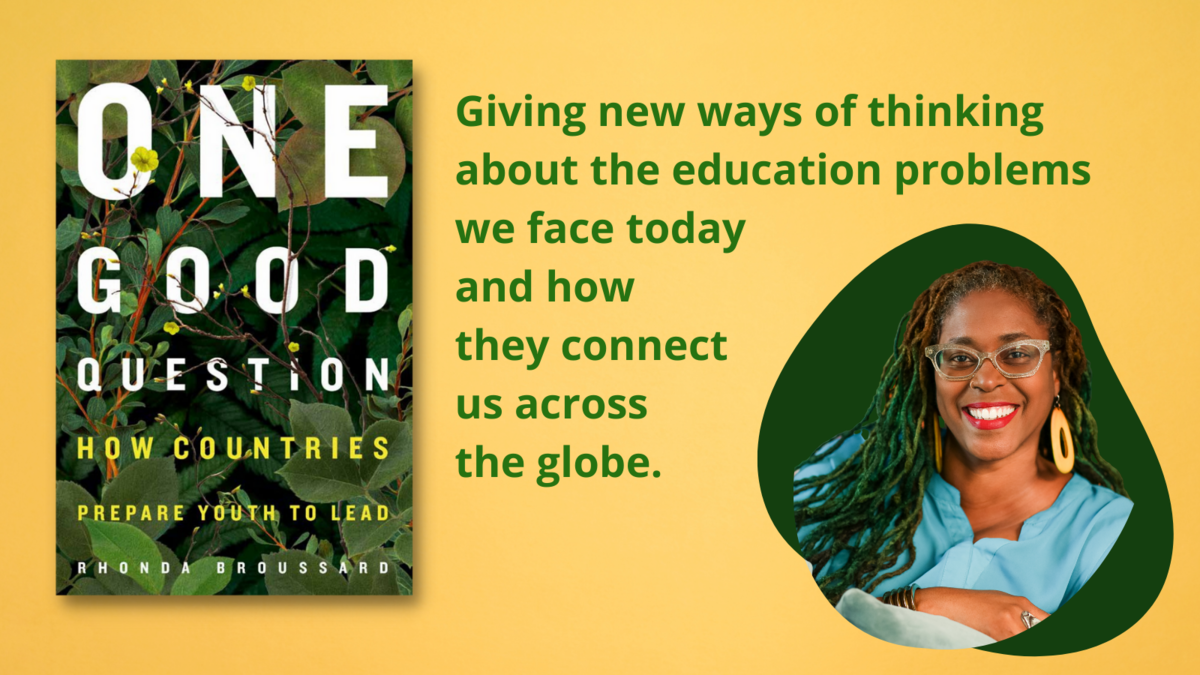 "I am a black-bilingual-queer-mama-French-speaker-dancer." This is how Rhonda Broussard, author of TBR Books' One Good Question, answers when I ask her to describe herself. During her early years in the classroom, she says she would tell her students, "If you come to school and I'm not there, I'm dancing," by way of explaining the last part of her intersectional identities. In her work and this book, Broussard makes connections across diaspora experiences and linguistic communities. Her curiosity and groundedness in multilingual experiences influences how she relates to people.  She continues: "I don't need to know your language to know the difficulties that different groups have experienced through discrimination," vis-à-vis a dominant culture.

In One Good Question, Broussard questions educators from around the world to determine how we, collectively and as individual cultures, raise our children and produce leaders of our societies. In Broussard's view, education "from a professional perspective is the clearest opportunity to keep learning and getting different types of people to relate to different content." She also describes educators as lifelong learners. For her, teaching goes beyond simply imparting knowledge, to making meaning with people, and finding out what they love. Then, in a classroom, or school setting, educators work in the standards from a district or government point of view. Being an educator is a "way to humble yourself," a call to ask: "What do young people need to learn?" She gave the example of one of her children who was given an assignment in school to create a timeline of the reigns of French kings. He didn't get a good report from his teacher on his progress. Broussard notes, in retrospect, that he could have done a robust job on a timeline of the characters and events in the Star Wars universe. But, where One Good Question really innovates is by allowing those who Broussard interacts with in the book–and readers–to determine their own "one good question".

In her interviews with educational leaders, Broussard says she got more and more comfortable not knowing the outcome of the discussion. She and these educators determined together that the best way forward was to ask really deep questions and to send the students out to look into these questions. In her own search for answers–and more questions–Broussard kept teaching, and started a network of schools throughout the St. Louis, Missouri metro area (St. Louis Language Immersion Schools). The focus was on International Baccalauréat (IB) frameworks for elementary school, with immersion programs that included The French School, The Spanish School, The Chinese School and The International School.

One Good Question, the book and the idea, became a way to connect with educators across the globe. In the end, Broussard was both "inspired" and "intimidated" by and, then, grew to be ok with, not knowing the answers. She recounted how the interviewees, leading lights in education their own right, all had their talking points. Then, they would take some space to answer her inquiries and discover, "I don't know that." What followed was going down a line of questioning, in-depth, together. For example, one interview was about educational leaders making site visits to schools and ended with a conversation on shifts in early childcare, and ultimately what is considered women's work.

Broussard's personal journey began and has returned to her native Louisiana. Some of her favorite products of the Francophones in this area of the Americas includes smoked alligator sausage, which is often used in stews; a trilogy of dessert delicacies–fig preserves, fig pies and pralines (candied pecans); and zydeco music. When I asked her what it means to be a Francophone from Louisiana, within North America, she began by saying, "It's so complex." She weaves together an explanation of the first Broussards to settle in Lafayette, who were deported by the British from Canada in Le Grand Dérangement. She has three distinct lines of forebears–Acadians from Canada; indigenous Choctaw and Creek communities; and Haitians who migrated north. Broussard's grandparents' generation was the last to learn and speak French first, then English in school. French, in Broussard's memory of her childhood, was the language of secrets, gossip, Friday night card games, and Monday morning coffee.Because of legacies of slavery, there are very light-skinned and very dark-skinned Louisiana Creoles. In southern Louisiana, if you're light-skinned, you're creole, she details.

Broussard, a national expert in racial and economic equity, also talks about the pain of racism and colorism among Francophones in Louisiana. “In school we learned the history of Acadian settlers, but not that of our Haitian ancestors.  When you say Louisiana Creole, most folks assume that you’re talking about light-skinned people, so as brown-skinned Black Francophones, we get erased from both conversations.” To add to the complexity of the issue, the fight to keep any and all varieties of French and creole alive is far from won. When Broussard returned with her family to Louisiana after living elsewhere, her kids pointedly asked if everyone spoke French there. She told them, "No. We are part of language revitalization."  Looking into the future, she ponders how the role of French language in her kids' lives will develop as they navigate adulthood. "I know what I want it to be, but they will make their own decisions."

Despite all this material, which was used for a blog, Broussard didn't plan to write a book. "I didn't know where the blog would take me." She consulted a poet friend who encouraged her to find the narrative she wanted to create. She then saw the U.N. Sustainable Development Goals, recently published, arising throughout her content. It was, in this vein, a matter of realizing that the American lens is not the only one and to consider educational situations–and questions–in other countries, with a local perspective. Finally, she urges American educators who read this book to make space for international perspectives. To create their own One Good Question. Broussard certainly will continue to seek to answer them–and to ask new ones.

To order the book and support CALEC, click here: One Good Question by Rhonda Broussard