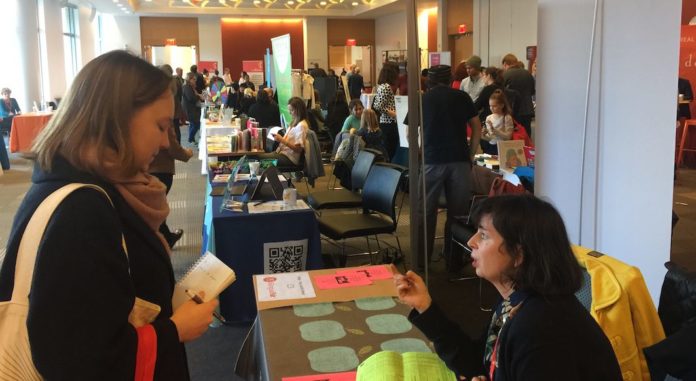 Now firmly established in the New York educational landscape, the 2019 Bilingual Education Fair, organized by French Morning, is expanding its offer for its sixth edition, which will be held on Saturday, November 23, at Fordham University (get your discounted tickets here now).

Schools, extracurricular activities, booksellers, publishers and other exhibitors, some sixty in all, will be there to help you navigate the available offers in bilingual education (see the list of exhibitors here). About ten languages will be represented. On the French side, all the schools in the New York area will be there, public or private. It’s the opportunity to ask all your questions about bilingual education in one place.

As every year, the conference program will provide parents and educators with an opportunity to learn and discuss, including about controversial topics in the world of bilingual education. Bilingualism and multiculturalism in public schools (at 10:30 a.m.) will host elected officials and representatives from the New York City Department of Education to discuss the challenges facing public schools.

Later in the day, Mariam Ottimofiore Navaid, a specialist in third culture kids, to whom she has just devoted a book (“This Messy Mobile Life”), will lead a round table, Raising Happy Kids Between Cultures and Languages (at 1:30 p.m.), where we will discuss strategies and advice for families with kids of one culture raised in another.

Other conferences include: Navigating Special Education in New York City and the Bilingual Child with Special Needs (11:30 a.m.); Trials and Tribulations of maintaining minority languages alive: the example of Sardinian, Catalan, Alsatian and Breton languages (11:30 a.m.); Singing and speaking: reciprocal influences of music and language in early childhood development and learning (2:30 p.m.). Sign up for conferences for free here.

For the first time, the Bilingual Fair will recognize six people whose work has contributed to the development of bilingual education in New York. Nominations are open until October 30 in the following categories: Leader, Trailblazer, Visionary, Student, Parent, Patron. A jury of experts will select the winner of each category. The trophies will be presented during the ceremony (1 p.m.) presided over by Gale Brewer, Manhattan Borough President.

This year, the programme of activities and conferences has been enriched. For children and teenagers, in addition to a multitude of free activities with our partners, we’ll welcome the French rapper Hippocampe Fou. The inventiveness and creativity of this singer-songwriter’s texts, a combination of rap and slam poetry, earned him a loyal audience in France. Twenty lucky children and teenagers will be able to participate in a two-hour session led by “Hippo” himself, which will culminate in the creation of a group song performed in front of the Bilingual Education Fair audience. The first workshop is from 10:30 a.m. to 12:30 p.m. for French-speaking children aged 8 to 11 years; the second workshop is from 1:30 p.m. to 3:30 p.m. for French-speaking adolescents aged 12 to 15 years. Free registration required (register here).