Skyscrapers are threatening the beauty of the City of Light. 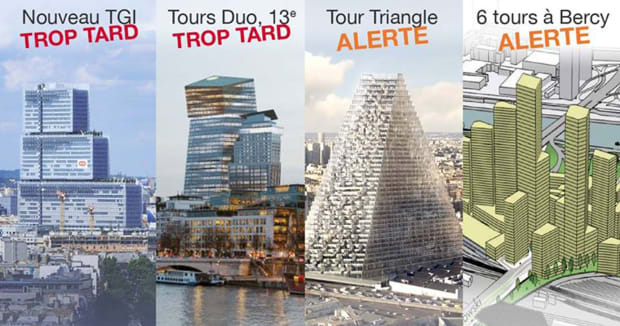 The world loves Paris because it is beautiful. Since the 17th century, first royal decrees and then statutes have governed its appearance. Paris has had height limits for hundreds of years, and they help maintain the city’s unique low skyline. But today political pressure is gutting the law. The beauty of Paris is under threat. Residents feel powerless. And the world does not know.

The zoning law of Paris, the Plan Local d’Urbanisme (PLU), aims “to preserve the urban forms and the patrimony coming from the history of Paris, all the while permitting contemporary architectural expression.” It specifies building heights and materials for facades, among much else. Permission may be refused if a building may “undermine the character” of its surroundings.

However, Paris City Hall, developers and star architects say that Paris needs skyscrapers to be modern, by which they seem to mean, more like Dubai. They accuse opponents of promoting a museum-city, a ville-musée. But opponents of skyscrapers, including French preservationist association SOS Paris and, more recently, the International Coalition for the Preservation of Paris, ICPP, which I founded, strongly disagree.

Mary Campbell Gallagher, J.D., Ph.D., is the founder and president of the International Coalition for the Preservation of Paris, ICPP. She is U.S. liaison for SOS Paris. She is editor of the forthcoming book of essays, Paris Without Skyscrapers: The Battle to Save the Beauty of the City of Light, coming from ICPP, in cooperation with SOS Paris. Go to SaveParis.org for information.