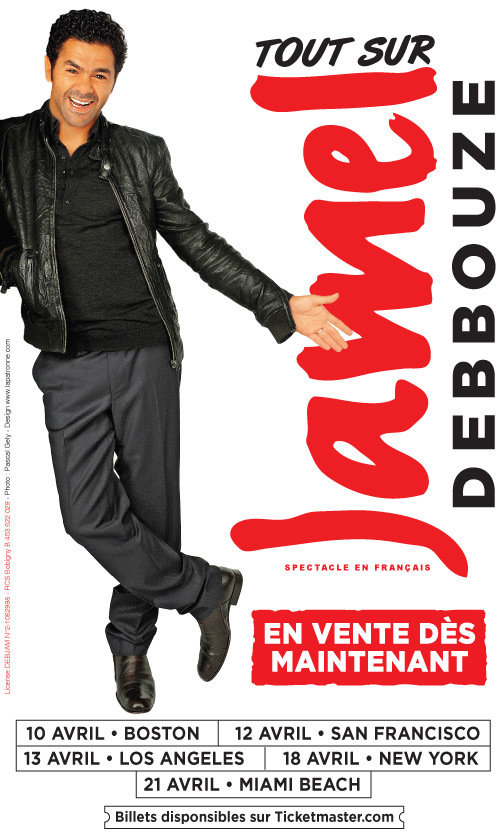 Jamel was born on June 18th 1975 in Paris, the oldest of 5 brothers & sisters. As a youth he participated in several improv contests such as the World Amateur Improvisation Championship in Quebec.

In 1997, at only 17 years old, he got his first role in the cinema. This marked the beginning of a long series of movies such as Amélie, a film by Jean Pierre Jeunet, and Asterix & Obelix Meet Cleopatra, for which he was nominated for a César Award for best actor in a supporting role.

He got his first leading role in 2005 in Luc Besson’s Angel-A, and in 2006 he was part of the award-winning cast of Rachid Bouchareb’s Indigenous, which won Best Male Interpretation at Cannes that year.

He continued on his cinematographic path by starring in Asterix at the Olympic Games, Outside the Law, The Marsupilami and executive producing Spike Lee’s She Hate Me.

Jamel continued to perform live on tour including some of the most beautiful Parisian venues such as the mythic Olympia.

In July 2006, Jamel created “Jamel’s Comedy Club”, a TV show taped in his theater that highlights new talent. Also open to the musical scene, the comedy club has hosted performers like Stevie Wonder, 50 Cent, the Black Eyed Peas, Mika and many others.  In May of 2008 Jamel married anchorwoman Melissa Theuriau, and their son was born that December.

In 2011 Jamel made his big return to the stage with a whole new show called “All About Jamel”. As the title says, he unveiled everything about himself, broaching events from his life with the humor and expressiveness that characterize him.

Jamel is currently preparing for the International Humor Festival in Marrakech, which will take place in June 2013. In the meantime, he is taking his act overseas with an international tour.