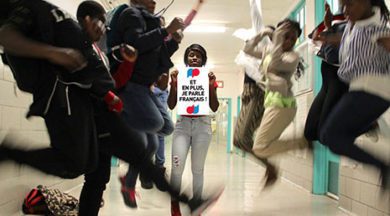 Nearly 2 million. That is the number of people who speak French in the United States today. They come from Europe and Canada, as well as Haiti and Africa. With an expected 800 million French speakers in the world by 2050, and 83% of them living in Africa, French is not only a fast-growing international language, it is an increasingly multicultural language that can only be an asset to the future of our students, and a resource that should not be wasted for their communities.

For many of these French speakers, maintaining this first or second language is often a challenge, especially for new immigrants and disadvantaged families. Because they are focused on English acquisition, the French speaking students tend to lose their French very quickly when they arrive in the US. However, research proves that bolstering a first language accelerates the learning of a second language, like English! The French Heritage Language Program was created to prevent this loss and foster native language use.

Created in 2005, the main goal of the French Heritage Language Program (FHLP) is to help francophone immigrants and young Americans with francophone background to maintain their linguistic and cultural heritage. For more than 11 years now, it has been dedicated to supporting underserved French-speaking youths making French an asset for new Americans.

Today, the program is present in 4 of New York City’s 5 boroughs, and offers workshops in 10 schools within the Internationals Network for Public Schools, in the Bronx, Queens, Brooklyn and Manhattan. More than 200 NYC students now partake in the FHLP activities every year. Moreover, the program’s success in New York has led to expanding classes in other states and including Boston, Maine, Miami and Philadelphia.